Pulled pork is AWESOME! Easy to make, inexpensive, and it feeds a huge number of people. The following recipe is based on the boneless (de-boned) pork butts from Costco. You can also buy bone-in butts from Sam’s Club (or your favorite grocer/butcher) and then you don’t need to mess with the flaps of meat described below.

A pork butt does not come from the butt of the pig. It is the top part of the pork shoulder. It is called a “butt” because butchers used to put them into big wooden kegs called “butts”. It also called a “shoulder roast” or a “picnic roast”. The weight varies is typically 7-8 lbs per butt and in my experience you can feed 15-20 people per butt.  Pulled pork makes fantastic leftovers.

If you buy the butts at Costco they are always de-boned and they come two per package. De-boned sounds convenient, but it is actually a disadvantage because the flaps where the bone was removed tend to flop around and dry out. I use short bamboo skewers to stitch up the flaps and keep them from drying out. Sam’s Club sells butts with the bone in, so that is where I normally buy mine. An added benefit of Sam’s Club is that if you buy 7 or more butts, they will usually give you the case price. On some occasions, I have purchased 100 lbs of butts for about $1 per lb. Cheap! When the butts are done, the bone slides right out without a hitch and the meat around the bone is very moist. Bone-in is the best.

1. Apply a liberal amount of rub to all sides of the butt. The butts in this photo are from Costco so you can see the stitching with the skewers.

You can also put them in a disposable aluminum pan as shown (optional). This makes for a simpler and cleaner cook. These are called “half-size steamer pans”. I buy them at Sam’s Club for ~$0.17 each. Sometimes they sell them at Costco.

2. Turn on your smoker and set at 225 degrees. Use hickory or apple pellets. Put butts in smoker and cook for four hours.

3. After four hours, remove the skewers and wrap the butts in foil. If you are using pans, just cover the butts with a layer of foil. Otherwise, wrap tightly with TWO sheets of heavy duty foil. You could add a little apple juice here, but you don’t really need to.

4. Returned foiled butts to smoker and continue to cook until the internal temp hits ~195-200 degrees in the thickest part. This part can be completed in your oven in the house if you like. No more smoke is applied so it is just a matter of heat at this point. Saves yourself some pellets. This stage typically takes an additional 4-6 hours after the smoke stage (8-10 hrs from the start) – however I have seen this take up to 10 hours depending on the butt. So it is wise to get an early start on the process so you don’t get stressed if the meat is not done and guests are due to arrive. If you want to hurry things up, you can crank up the smoker/oven temp to 275 or even 300 degrees during the foil stage to hurry things along, but you need to be sure to watch it very closely so you don’t overcook and end up with a tough, dry result.

5. Remove from smoker and hold the foiled meat at 160 degrees for at least two hours (they can be held for six hours or more). This resting period is important because it breaks down the connective tissue. If you are cooking in your oven, you can simply turn down the temp to 160. Or you can wrap in towels and put the butts in a plastic cooler. This holds the temp nicely for four hours or so. A Cambro is perfect for this if you have one.

6. Remove the butts and place at room temperature 30-45 minutes prior to pulling/serving. This causes the muscle fibers to relax and reabsorb water.

7. When you are ready to pull the butts, take a set of tongs and putt big chunks on a cutting board and pull into chunks. DO NOT SHRED! If you shred the meat it dries out. Leave in chunks. I like to take a big knifed and chop into chunks (cutting perpendicular to grain of meat fibers). I also like to sprinkle on a little bit of rub on the inner part of the meat and toss to get the rub flavor distributed everywhere. As you pull the meat, start at the end with the flaps. The meat around the flaps is very good. There is a big muscle in the middle that tends to have longer fibers. The very best part of the butt is called “the money muscle” and is the end opposite the flaps. I like to pull this last and place on top with the drier cuts on the bottom. Then I take 1-2 C of juice and pour over everything (1 C per butt). By the time you get to the bottom, the drier cuts have usually reabsorbed most of the juice and are moist and tender.

Enjoy! We like to eat them with fresh rolls and cole slaw. 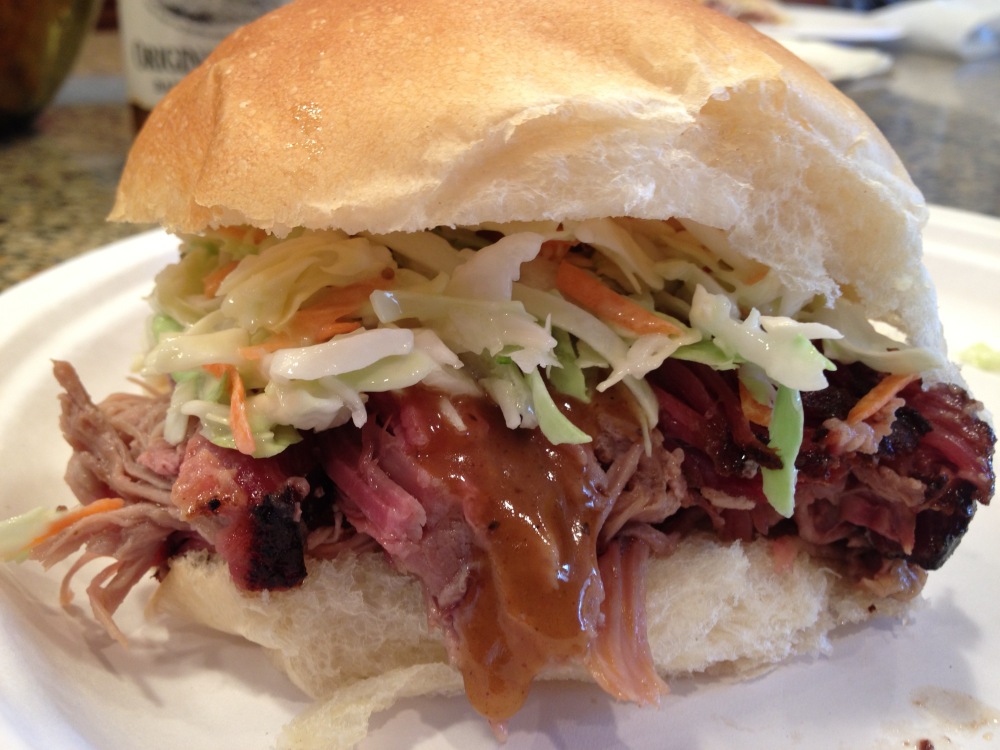 One other option is to inject your butt with a phosphate-based injection. I like to use a mix from Butcher’s BBQ brand. You mix it up and inject at least four hours prior to cooking. DO NOT INJECT the money muscle. Inject the middle and the flaps. If you inject the money muscle it gets too soft. The injection makes the final product even more moist and flavorful. Still good either way, but try this out sometime.